Coming to Detroit from Birmingham Alabama in the late sixties, Kojo Darden has been an active member in the Shrines of the Black Madonna of the Pan African Orthodox Christian Church for over 40 years. There he learned the need to give back to the community. He served in many areas of the church and the community. He is actively involved in the Black Slate. a local political organization, and many other Nationalistic organizations dedicated to uplifting African Americans.

Baba Kojo has been a business owner for much of his adult life. Starting with Pre-Paid Legal and Amway, he has been a distributor in many Network Marketing companies. He was President and CEO of Kojo Transportation for over twenty years. He was also the Chief Operating Officer is his wife’s business, which he expanded into a national corporation.

He attended Wayne County Community College earning an Associates of Art Degree, a Bachelor’s Degree in Psychology from the Detroit Institute of Technology, he is currently a licensed Social Worker, earning a Masters of Social Work Degree from Wayne State University. 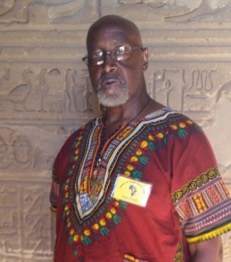